Editor’s Note:  In light of Covid 19, we are paying tribute to all essential workers.   Marcia is our co-owner Marc Menkin’s twin sister. Pictured are Marcia’s son Ryan, husband Barry and daughter Carly. 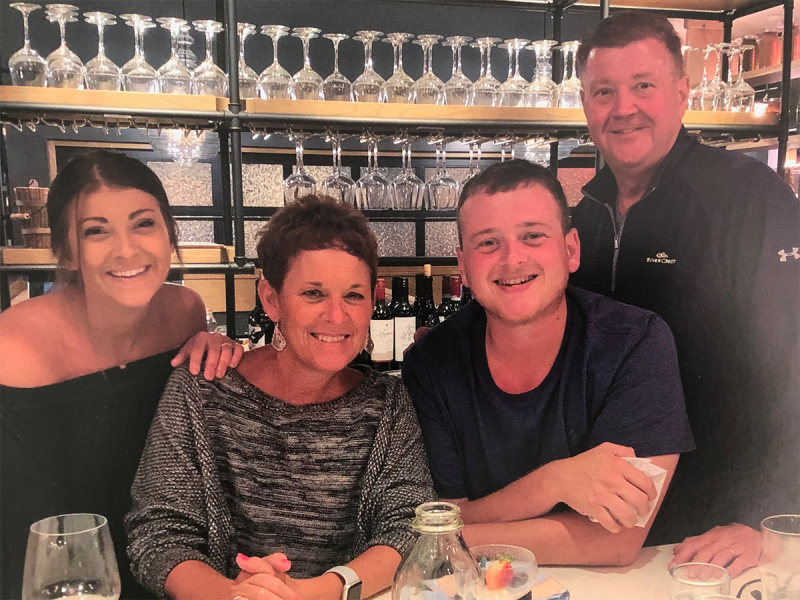 Equipped with virtues, we can turn the most trying experiences into teachable moments.

With the Covid-19 pandemic, these past months have been full of trying experiences. We recently asked how people are and aren’t coping and discovered a mother and daughter in Pennsylvania with an inspiring tale of caring, courage, helpfulness, service and steadfastness.

Marcia is the mom. She’s a physician’s assistant who works with elderly patients in nursing homes Carly is the daughter. She is a pharmaceutical sales representative living at home with her parents.

Covid-19 has hit nursing homes hard. “It’s been awful, spreading like wildfire,” says Marcia. No visitors have been allowed in her facilities since March. The only human interaction Marcia’s patients have had has been with their caretakers.

Marcia has been working with senior citizens for 30 years and loves her job, but she says there has been an emotional toll lately. When her patients are in quarantine, there’s no pill to cure the loneliness or isolation. When they’re sick especially, many cry out in vain for family members.

“When the pandemic first started, it was overwhelming,” says Marcia. “There were many days where I would sit in my car after work and cry – and I’ve got to say, few things rattle me.”

As upsetting as the situation was, Marcia remained committed to her work. Then, in addition to her patients, Marcia’s colleagues started getting sick. A doctor caught the virus, and then a family nurse practitioner. “A lot of caregivers were getting it, including a nurse who ended up on a ventilator for three weeks,” Marcia adds. “It was pretty bad.”

As the outbreak spread, there wasn’t enough personal protective equipment (PPE) to go around. Some care givers wore the same mask and gown for weeks. Staffing issues developed at the nursing homes. Several nurses quit because they were scared. “We were really short staffed and under-equipped,” Marcia says. “I don’t know how we held things together.”

Marcia wasn’t facing financial hardships at the time. She didn’t have to come to work and risk her life in order to pay the bills. Her husband is a dentist, their children are grown and they have built equity in their home over the years. But the physician assistant felt obligations to her patients and her colleagues. “It’s my job to take care of these sick people,” she says. In spite of the challenges, she refused to quit.

Then, on Mothers Day, Sunday, May 10, Marcia started feeling lousy. As she stood in line for take-out food that evening, her legs ached so much that she had to sit down. Later she didn’t sleep well. On Monday she went to work, but by the end of the day, Marcia was overtaken with body aches and fever.

“I was pretty sick, with a dry cough and a headache,” she says. “I wasn’t surprised with the diagnosis. I was sure I had it, so my husband drove me to get tested. I was never really worried about myself though. My concern at that point was for him and the kids.”

Marcia’s husband and both of her children tested negative.  Carly says she was frightened, but insisted upon remaining with her mother through the entire course of the illness.

“I’d been working from home because of the pandemic, so I obviously wasn’t going anywhere,” she adds. “It was difficult trying to help my mom without catching the virus, but I was least concerned about myself. I’m 23 years old and healthy.” 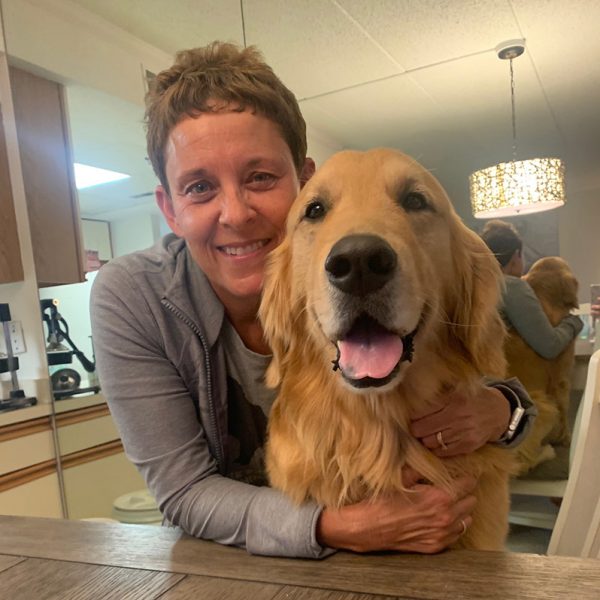 In addition to her mom, Carly was concerned about her dad. He was at greater risk than she was, and Carly didn’t want to place him in any more danger than necessary. So she was the one checking in, taking Marcia’s temperature five times a day, preparing meals, washing linens and constantly wiping everything down.

“She was great,” Marcia says, referring to Carly. “She kept the whole house disinfected.”

“I felt like that’s what I needed to do,” she says. “It was exhausting. I still had to my work to do from 9 to 6. But my mom and I are best friends. We’re very close and I think I have that same caregiving gene she has.”

Marcia’s continuous headaches were a major concern. She was in excruciating pain for days at a time and Carly repeatedly asked, “Do you need to go to the hospital?” But the respiratory issues were what scared Marcia’s daughter me the most. “The fevers we could deal with,” she says, “Fortunately she was breathing ok.”

Although she lost her sense of taste and smell for a while, Marcia’s appetite gradually returned. With proper care and rest, she recovered in about three weeks. The entire Foster family continued to get tested and retested. After Two negatives and the assurance that no one else in the house had contracted the coronavirus, Marcia finally returned to work.

“I felt guilty being out so long,” she says. Some of her other infected healthcare colleagues however were out five or six weeks with the coronavirus. The disease affects everyone differently. Marcia says one recovering nurse is still suffering from chronic fatigue.

There are many like Marcia who will risk their lives to support workplace colleagues and do what they do best. It’s not about the money, or even the professional pride. What happens though, when selfless acts of valor place others at risk – particularly those we love the most?

When family members fall sick, some will step up and become care givers while others are better served by distancing themselves and playing it safe. Caring for someone at home with Covid-19 may detract from earning an income, and it requires extra energy, patience and compassion. But again, there are costs and consequences for such choices, and some may pay the ultimate price.

We all weigh risks and rewards when we make decisions. The rational mind considers the costs and the benefits. But there are also virtues within all of us that guide our actions and the paths we take. They are often invisible influencers and we’re not consciously aware of their presence when we deliberate.

Acknowledging and embracing virtues on the other hand can help us all to be our best, especially when the choices are difficult in trying times like these. We wish Marcia, Carly and their family the best and thank them for sharing their experience during this pandemic. 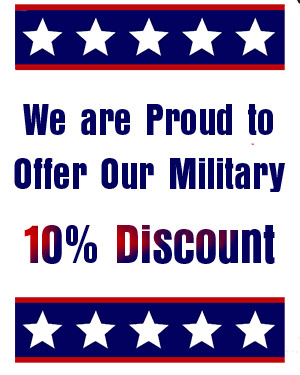 Out Of The Ordinary

You two were a pleasure to work with, as was the team you brought in, and I will certainly be recommending your group to others. You went above and beyond, and our entire team had an amazing experience. Love the pictures as well. Can’t wait to share the link with the team. Such a cool bonus!

I had a group of 40 professionals in La Jolla for a seminar and needed some fun activities so I found Out of the Ordinary Group & Team Adventures simply because of the catchy name! And let me tell you, their name says it all! Not only do they offer "out of the ordinary" events and excursions, they also go ABOVE and BEYOND to give everyone a wonderful experience! The best part for me as a Meeting Planner was, instead of using separate vendors for all our activities, we were able to use Out of the Ordinary for all 3!!! We did the Sip n' Score games at our Welcome Reception, the Wellness Walk through La Jolla with breathtaking views and for our team building we did the Bike Build Charity Give Back and were able to donate the finished bikes to a wonderful local organization, It's All About the Kids, just in time for Christmas! Thank you Darlynne, Marc and the entire team at Out of the Ordinary for all your help!

First and foremost just wanted to say THANK YOU both for such a fun-filled experience on our scavenger hunt.

They all loved it ...What a great time spent together – and that is what it’s all about. Getting to know each other better and having some fun and laughs along the way. Still can’t get over Jason singing that song..haha.

Thank you again, I admire you both so much and can’t wait to partner up again hopefully in the first quarter to do something on a bigger scale with the entire hotel team.

Wishing you and Marc Happy Holidays and thank you for brightening up everyone’s day! You have my dream job!!!!!

As someone who has planned many team building and corporate events, I have to say that hands down, Out of the Ordinary takes the spotlight on professionalism, reliability and delivering an unforgettable experience. When I was tasked to plan a team building/holiday party in less than 4 weeks, I was so relieved to be working with a company that really has it together! Marc & Darlynne are so enthusiastic and really know how to think outside of the ordinary with every detail. I am so used to the behind the scenes chaos that typically plays out on the day of an event, but OOA's team was so polished and calm. Definitely a relief! I was even able to enjoy the event myself and participate as a guest.

We booked the urban scavenger hunt at Balboa Park, in San Diego, for a company gathering and we had a great time!
Darlynne and the other guides were very helpful, guiding us through the park and giving us clues when needed without influencing the game. We all feel that we know better the city we live in, and we received great feedbacks from our whole team, so I can say that it was a lot of fun. Liana G

Darlynne and her husband Marc did a great job with a video coaching session for how to best present on Zoom. The content was customized to our audience with pre-questions from Darlynne. I would recommend her for this type of training if your organization can benefit in these days of working virtually.

My work team did an Outrigger Canoe Challenge recently and everyone enjoyed the event! It was fun and exciting and really helped to bring the team together to enjoy the day outside of your typical working environment. The staff was very friendly, professional and attentive and everything was set up and coordinated perfectly. They made everything super easy from the 1st phone call to the actual event!

Our school, High Tech Elementary Chula Vista, did The Amazing Race scavenger hunt with Out of the Ordinary and had a blast! They were very professional, organized and fun! We just got to sit back and enjoy. I would highly recommend them for group building activities.

We always have fun with Out of the Ordinary! I know San Diego is in our future and I will always keep you in mind.

Just wanted to thank you, Marc and your entire team once again. From the beginning of our talks to the end, it was a great experience. You made us look good. Thank you!
Read more...
5
Excellent